I travel a lot for my job.  In fact, in my previous job I flew every single week, I left early Monday morning (ugh), and returned Thursday evening.  So it’s safe to say I know a thing or two about flying, and while usually it’s with the same airline over and over and over (I love my miles), flying Qantas was a borderline religious experience.

Flying in the US is dogged by well, the lack of everything.  Service, food, snacks, nuts.  You get what you pay for you, and even what you pay for you don’t always get.  So when my husband and I decided to honeymoon in Australia (many posts on that later), flying Qantas was an actual dream come true.

While some Aussies (well one we encountered) feel that Qantas has gone down hill in the last few years, I dare them to come the US, fly domestically and then tell me Qantas isn’t the greatest thing since sliced bread. 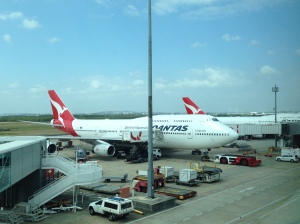 So why is Qantas so fabulous?  WELL.  Let’s talk free food.  And not just at meal times.  There were copious amounts of food and snacks to be had, everywhere.  Pouring out of every orifice in the air you’d find a free snack. On our flight from LA to Sydney, we boarded around 11pm and immediately were met with a free dinner.  Granted ,I just wanted to sleep but, in keeping with American air travel, I assumed this would be on par with the Last Supper.  WRONG.  WRONG, WRONG, WRONG.  After finishing my meal I immediately crashed.  Overcome with exhaustion I fell right to sleep.  I was awoken a few minutes later by a lovely flight attendant giving me a backpack full of food, treats, and other goodies.  If that wasn’t enough – there were granola bars in baskets at varying points in the plane, and flight attendants in the pitch black walked around with apples, water, and juice.

As we approached Sydney, a full blown breakfast was to be had with more snacks, including, but not limited to Cadbury hot chocolate.  I honestly wondered if it was worth deplaning?  Why leave when everyone is so nice with wonderful service and treats?  It was a legitimate question, but I was thrilled to know that we were flying Qantas within Australia a few more times, but assumed due to the shortened time of the flights (~2-3 hours in length), the service would be different.

WRONG AGAIN!  On our 2-3 hour flight from Sydney to Cairns, we got a full blown lunch, a popsicle snack and anything else our little heart desired.  I couldn’t believe it.  You fly 2-3 hours in the US and you’re lucky to get a smile.

Needless to say, Qantas is the greatest airline I’ve ever flown, despite my small sample size.  It made coming back to the US that much harder knowing that my flight a few days later would be devoid of backpacks full of snacks and popsicles.

2 thoughts on “A love note to Qantas”